A Byzantine Art Event: The Face of Christ, April-June 2017 – an intercultural experience

When we first took on the collaboration proposal sent by Christina Matiaki, it seemed to be just like any other proposal we usually receive at the Department of Public Relations, Marketing and Cultural Projects. Teaching Iconography at Kozani, a course organized by the Bishopric of Kozani, Christina wanted to host an exhibition in the Suțu Palace with works painted by students studying icon painting, originating from three countries: Greece, Italy and Romania. As our collaboration progressed, the originality of the project, with an emphasis on Byzantine tradition in various cultures, and its valuable educational character became increasingly clearer.

The aim of the proposal was to continue the collaboration initiated in the previous year on the subject of the representation of the Virgin Mary throughout the centuries with a similar project in 2017 concerning the various instances used when depicting Christ. This year’s edition was put together with the following partners: Region of Western Macedonia, the iconographic seminary of the Diocese of Kozani, the `Aristotle` Cultural Association, the iconography seminary of the Diocese of Kastoria `Non Stop`, the `Saint Stylianos` Children’s Shelter in Kozani, the Naturalist Association of Mesopotamia in Kastoria and the `Associazione Archeosofica` in Florence, the `Iustinian Patriarhul` Faculty of Orthodox Theology,  the `Saint Filofteia` Theological Seminary and The Bucharest Municipality Museum. 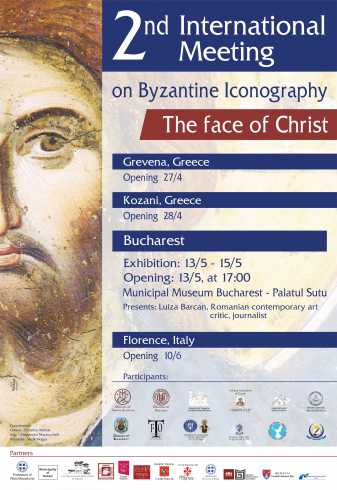 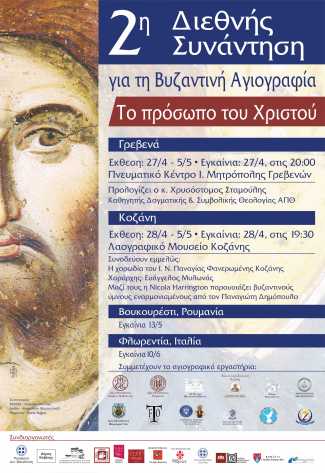 As a teacher of icon painting courses in Kozani, Christina Matiaki wished to offer her students the possibility to learn and meet people with similar interests and were also studying icon painting. As a consequence, the first edition facilitated cultural and artistic exchanges between students from Greece and Italy. Following the event’s success, the natural tendency to expand included Romania in this interesting and ambitious project by joining forces with Romanian students from the`Iustinian Patriarhul Faculty of Orthodox Theology ` and the `Saint Filofteia` Theological Seminary.

The 2017 international event began in April with exhibitions and workshops held in Grevena and Kozani, travelling in May to Bucharest following the same structure, ending on a high note in Florence. The Bucharest section of the event involved an exhibition hosted in Suțu Palace, the headquarters of the Bucharest Municipality Museum, with six large canvases depicting six of the 12 Great Feasts and icons representing Jesus Christ  made by students from all three countries. The opening of the exhibition was set for Saturday, May 13. One of the most interesting aspects that caught my eye was that three of the canvases were painted in Florence and the other half in Kozani, thus outlining the importance of intercultural collaboration when it comes to the Byzantine icon painting tradition. Additionally, the presence of icons painted on glass as a specific feature of old Romanian art outlined the main idea of the event. 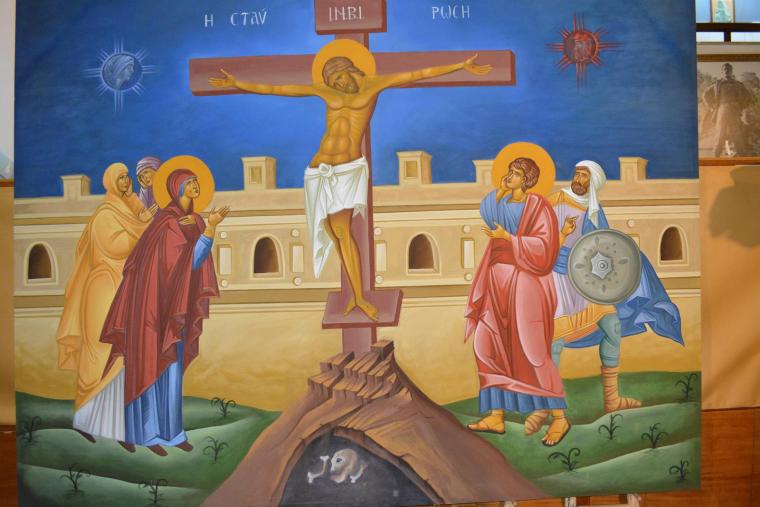 On Monday, May 15, the event included the workshop about Antique colours with Roberta Capezzuoli, Giovanna Caldarella and Javier Carrasco from the Laboratorio di Firenze and a series of presentations. The latter were delivered by scholars from the three countries involved in the project, namely: Prof. Ștefan Buchiu, the Dean of Faculty of Orthodox Theology, University of Bucharest, Dr. Vasile Timiş, Luiza Bârcău, Art Historian,  Prof. Vasile Bogus, Christina Matiaki, Theologian, Archeologue, Iconographer, and coordinator of the Iconography Laboratory of Kozani (Grecia), and Alessandro Mazzucchelli, Medieval Art Historian, coordinator of the Associazione Archeosofica di Firenze. The workshop and the presentations concluded the event in Romania with the final stage to be held in Florence. 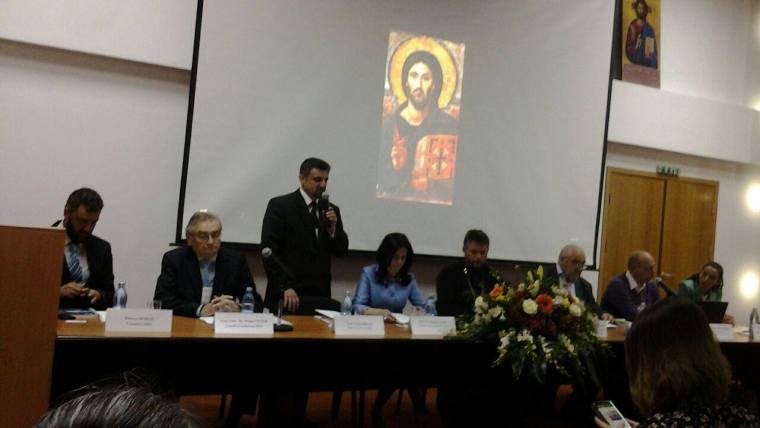 Having been so graciously invited by Alessandro Mazzucchelli, I attended the final event of the project in Florence. The exhibition containing the six canvases and icons painted in all three countries opened the event on Saturday, June 10. The following day, there were workshops and presentations, maintaining the same structure as the previous phases. Roberta Capezzuoli and Javier Carrasco discussed the various natural colours and pigments used in old art, emphasizing their natural and mineral origins, having in mind that some of them were actually being used in the icon painting courses held in the Associazione Archeosofica. 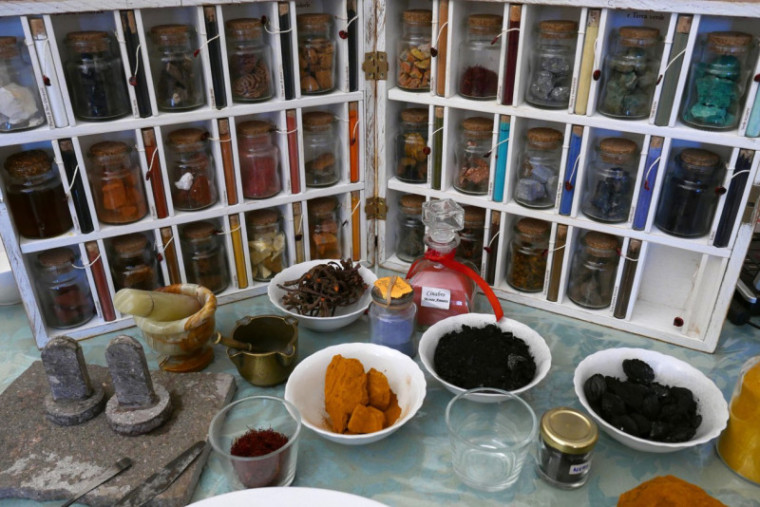 At 15.00 on Sunday afternoon, I gave a presentation about the Văcărești Monastery and the meaning of its frescoes, underlying the entire message of the iconographical program in relation with the political and artistic features of 18thcentury Wallachia. The day’s schedule ended with a practical drawing course taught by Christina Matiaki and Roberta Capezzuoli for the students who were attending the courses in Kozani and in Florence and were members of the project. 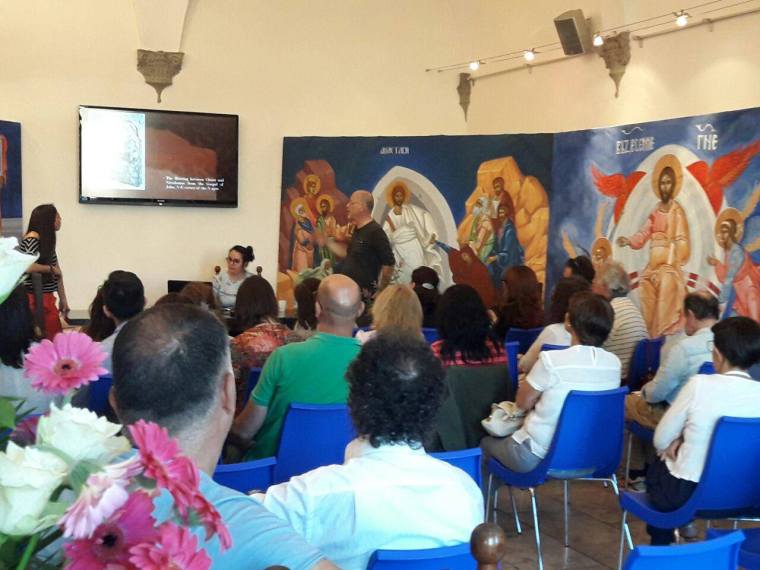 The Art Historian Alessandro Mazzucchelli gave a conference on June 13, La Via della Luce, that wasn’t included in the event, but intended as a corollary, focusing on the theoretical and theological basis of the icon. Using the words of John the Evangelist, Saint Gregory Palamas, and those of the founder of Associazione Archeosofica, Tommaso Palamidesi, Alessandro spoke of the special relation between the use of colours in icons and the spiritual message they entail. Besides the rules and conventions for icon painting set by various Councils and transmitted through the use of Ermineia, the icon represents one of the many instances of God’s incarnation, the Hristologic basis for the icon. God made Himself human so that humankind can have access to the divine. 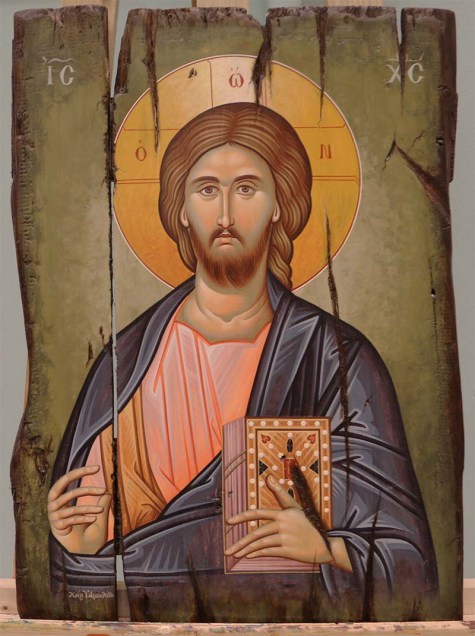 Through Incarnation God can be seen and represented. This short enunciation represents the theological background for the existence of icons. The Icon of Jesus Christ, of God as Human, is the visual expression for the Calcedon dogma. It depicts The Son of God made human, He who is of the same being as the Father through His divine nature and of the same being with us through His human nature.

When it comes to the conventions used in painting icons, Leonid Uspensky talks about the historical existence of many saints and its role in maintaining a certain iconography and most of their features. Thus, the process of painting an icon entails the obligation of transmitting and using an accurate representation of that particular Saint. Of course, this is not always the case when we take into account variables such as the painter’s talent, the local church’s own interpretation of the canon or the various Holy Synod’s resolutions. Also, having a somewhat resemblance to the historical character in the icon of a certain Saint does not entail the idea of a faithful depiction or a portrait. This is where Byzantine manuals come into play with their models and patterns spread across the Orthodox Christendom.

Alessandro’s main emphasis was that of the divine light that is present and transmitted through icon painting, a light that isn’t created by someone or something or can be seen freely, but made accessible to humankind by the Incarnation of Jesus Christ. 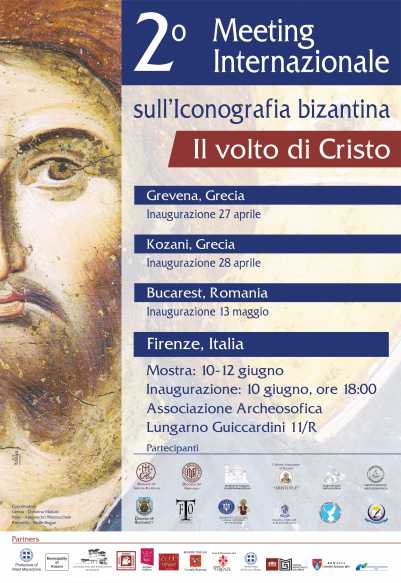 To me, as an art historian and a museum educator, being part of this project has constituted a very interesting and unique experience due to its sense of community, of its emphasis on education and shared knowledge. The discussions I had with Virginia Lullo, Art Historian, and Christina Matiaki and Alessandro Mazzucchelli gave me a valuable insight into the meaning and contents of the project. Moreover, the collaboration between institutions and associations from three countries is a wonderful opportunity to develop future ventures.

The educational dimension of this project is also apparent especially if we look at the how the courses are addressing age groups not so frequently targeted by museum education. This would be an opportunity to explore the possibilities of initiating educational programs for adults even in the Bucharest Municipality Museum. The students were mostly adults, with ages ranging from 30 to 77 years old and children from the age of 7 to the age of 12. The courses are designed in a way that covers both the artistic techniques and process of icon painting and the theoretical background. In addition, having the event as an approach to develop students’ understanding by ways of cultural exchanges with other countries, offers a particular perspective.

Initiated in 2016, this intercultural enterprise is on its way of creating a community united by the same appreciation of art and spirituality, working together towards a common goal, across national and cultural borders.

The article in Romanian is  published in the Museum’s Yearbook: “Bucuresti. Material of Istorie si Muzeografie “(Bucharest, Studies of History and Museology) in the unique issue of 2017.